As part of the Ecodesign Directive1 , the European Commission has passed a regulation that stipulates the minimum efficiency levels for LV electric motors that can be sold within Europe2 . The Regulation has its first effect in June of 2011 after which motors have to be of an efficiency class IE 2 or higher. In 2015, the minimum rises to IE3 or IE2 if combined with a VSD.

The Ecodesign Directive is a measure that has been introduced to raise the energy efficiency of a wide range of energy using products, ranging from light bulbs to refrigerators to electric motors. According to studies carried out for the Commission, these higher efficiency products should save consumers money in the long term due to their lower operating costs.

Motors are one of the first products to be regulated, reflecting their significance in the energy consumption mix. The regulations have already been passed into UK law and stipulate that: From 16th June 2011 only LV motors of efficiency class IE2 or greater can be put onto the market in Europe. 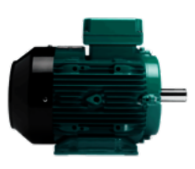